Yeh, his choice of guitar is about tone I'd say. Generally, the tele was used for the majority of Parklife, Great Escape, Blur and 13 songs that demanded the cutting edge of the single coil pickups or the meaty sounding middle position that the 52 tele reissue offered. Graham rarely used the neck pickup alone on the tele up to 13. The gibsons offered much thicker rockier sounds. The 335 was used to get a Beatlesesque (I want you (she's so heavy)) tone when ha Graham has been a long admirer of. Hence it's use on more laid back tunes This is a Low and No Distance Left to Run. For my money, his mid 90s live guitar tone with the tele 52 reissue and the marshalls is the best guitar sound I've ever heard, there I said it!
Top

Oh, and with regards to why has he changed guitars over the years; he has stated that the 52 reissue neck was quite difficult to play and that newer tiles have nicer necks which makes playing so much easier. As with any guitarist, you always get bored of a guitar, change it, then come back to it later. I'm guessing this is why the les Paul still gets used but less so than before.
Top

yeah, he does that

he used that in some late 90s music videos but i've never seen it live
http://theangulars.bandcamp.com/
Top

Interesting information. I think he used the Musicmaster for a solo live performance: Another mystery case is the Jaguar, which was used live for Lot 105, but obviously nowhere else. 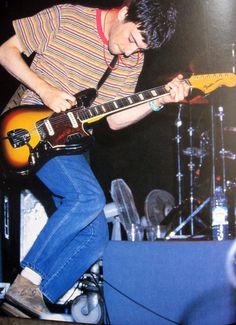 As for the Gibson SG, he used it live for Oily Water, Intertia, Swamp Song and M.O.R., as so far I can see. Interia was played in the early days, so I guess it was maybe played with a Les Paul. So it's interesting that he changed and used the heavy sounding SG in 97.
Top

Is it connected with the tuning or a special sound of another guitar?

Regarding tuning, it's interesting how he seldom uses alternate tunings with Blur, and a lot more in his solo stuff.
I can only think offhand of Swamp Song and No Distance Left To Run for alternate-tuning Blur songs, whereas we have That's All I Wanna Do tuned CFCFAC, Home EADGGD, In The Morning and Tripping Over DGDGBE... Big Bird DGDGBD I think...
Top

Yeh, it's interesting about the tunings but I think he only really got into tunings when he did primarily acoustic stuff I.e. solo stuff mainly. Swamp song is a slide tuning and no distance left to run is definitely standard tuning. Perhaps down a tone on the record (Paul McCartney did the same on Yesterday) but live it was standard tuning.

Jaguar was used on He Thought of Cars live by the way: https://m.youtube.com/watch?v=GqN5WCidjjY" onclick="window.open(this.href);return false;

Blur at their best on that performance I reckon
Top

Blur at their best on that performance I reckon

Yes, thanks for the link. Saw footage of the 96 US tour where it was performed, too. Quite funny that they took this one guitar for one solo song over the ocean. The Jaguar was also played at the "Eine Kleine Lift Musik" video.

As for the tuning, I read that Graham had the idea to record the whole Blur album without tuning his guitar. But Stephen Street had to tune it back to the standart tuning.
Top

He used the same guitar for the Bitter Sweet Bundle Of Misery video:

Got the Jaguar, too. Remember learning to play She's So High on it and noodle around with the tremolo, quite funny

I always aked myself how he could jump so high with a massiv instrument like this, but it must be taining.
Top

Did anyone hear any of the Radio 1 Vintage DAB pop-up station which was broadcast last Sat - Mon. They played old shows throughout the weekend based around individual DJs. There was one about the Evening Session which includes a short interview with Graham. He was talking about having just bought an old Ford Bronco pick up truck and playing country music in it and Steve Lamacq asking Graham why he’d bought a mobile phone in a most perplexed manner: ‘Who calls you on it?!’ to which Graham said he hoped his mum might call him on air.

When owning a mobile was a talking point.

It’ll still be on iPlayer if anyone is interested.

Yes, I am gradually working my way through the R1 Vintage broadcasts on the BBC i-player.

I have heard the 'Evening Session' one - it was interesting in many respects (early 90s interviews with Nirvana, U2 etc) including Graham and the mobile phone.
"Everybody's Doing It...So Do It Too...."
Top

I don't know if this was ever the object of a discussion, but dit The Jesus and Mary Chain influence Blur? They toured together etc., but was it ever mentioned or audible?

By the way, the sound of Far Gone And Out always reminds me a little bit of Bang: https://www.youtube.com/watch?v=7v4AAd00dSQ
Top

But Julian was making better records in 1992 than Blur...

Pressure on Damon, then...