Seeing the band in three days

Couldn't be more excited to be honest, it's gonna be my second time watching them live.

Anyway, there's usually a full live stream for Super Bock Super Rock's headliners, so it would be great if someone could record Friday's gig. Their twitter handle is @sbsr, I guess that they'll tweet the link if it gets streamed.


Edit: Cheers for telling about the (possible) live stream! I made this into a new topic. -Veikko
Top

As for the stream, as usual it's still a will they/won't they, but here are some links in case there's an audio or video stream that might be useful:
http://mytvfree.me/sic-radical-online (Sic Radical is the offical tv channel)
http://media.rtp.pt/blogs/superbocksuperrock/ (Antena 3 is the offical radio station)

maria wrote:Glad I won't be the only one from here to loose my voice shouting every word

As for the stream, as usual it's still a will they/won't they, but here are some links in case there's an audio or video stream that might be useful:
http://mytvfree.me/sic-radical-online (Sic Radical is the offical tv channel)
http://media.rtp.pt/blogs/superbocksuperrock/ (Antena 3 is the offical radio station)

Cool, thanks! I hope the front doesn't get too packed before Blur's set, I'm gonna try to get there a bit before dEUS' set, which should also be quite good.
Top

Deus and blur in the same stage... My dream!
Top

If there is a live stream from Blur's gig, it's here:
http://www.rtp.pt/play/direto/antena3festivais" onclick="window.open(this.href);return false;

Shame my net is very slow right now, so I dunno about recording.

what time blur will be on stage?
Top 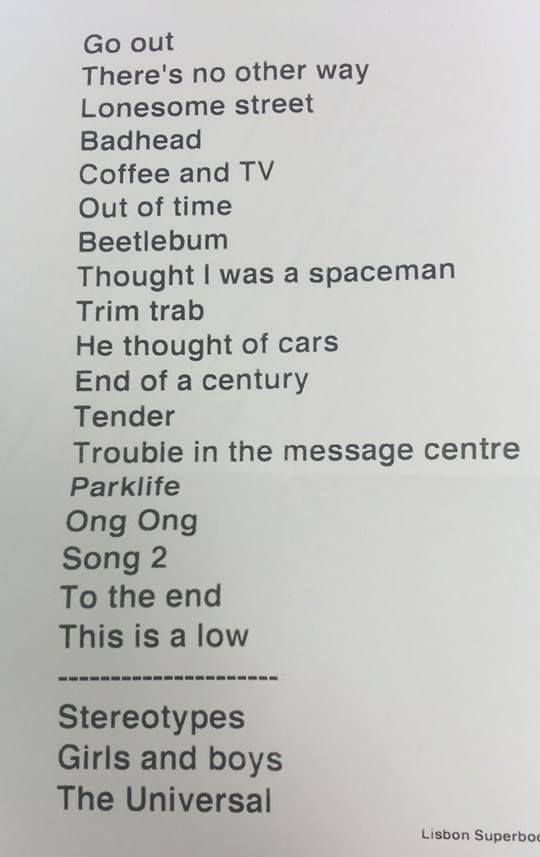 Just came back, it was a great gig, crazy atmosphere although they played only four TMW songs (and they got a very good reception but oh well). I actually had to go to the back for the encore cause I was completely shattered after Song 2

I'll try to upload some videos and photos when I get home tomorrow. Highlights were Go Out, HTOC, TITMC, Trimm Trabb and TIWAS. Some guy jumped on stage during Parklife and got to sing the whole song with Damon, it was quite funny.

The setlist posted above lacks For Tomorrow in the encore.
Top

Just arrived home. What a stupendous gig! The only bad thing was the sound, but that was not their fault at all (and didn't stop it from being a great show). I was on the left side of the arena in the lateral barriers near the front and the atmosphere there was crazy and intense. Damon conquered everyone with his silly dances and gestures and ongoing communication with the audience. He came down to the barriers 3 times if I'm not mistaken (Lonesome Street, Trimm Trabb and TITMC).

As for the setlist they dropped I Broadcast for End of a Century, which was sad in one hand but on the other the response to EOAC was phenomenal so it was totally worth it.

One of the times Damon came to front barrier a fan asked for Parklife and he answered something like “of course, but not now! Unless you want to come up here and make a fool of yourself if you don't know the lyrics...”

On a more personal perspective, and be aware it's from someone who had never seen them (due to unexpected circumstances I missed their gig in Primavera 2013) and was longing to, it was the best gig I've ever been to! You know when you have such high expectations of something that you fear you might be a little disappointed? Well they surpass all of my very high expectations

From all the gigs I've ever been to (they may not be a lot, but they are already some) I've never experienced such great atmosphere both from the band and the audience as in this gig.

Yep, the sound was pretty bad but that's what you get at a festival I guess. That's one of the reasons why I was annoyed that their only European gigs -bar the Paris one- were festivals but I get that it's the easier way to reach more people and countries without touring that much.

How did you manage to get to the left side of the stage?

I was between Damon and Alex in the third row and almost died during the first songs and Song 2. Everyone knew the words to pretty much every song, it was even better than Porto 2013 in that way.
Top
Post Reply
24 posts