i hope this does not effect new blur music....

This is nothing new and there were some rumours about the time TMW came out about frictions between Alex and Dave over their differing political views. But as it seems, Alex and Dave are perfectly ok with each other, there were a photo of them jamming together (at Alex´s farm I think), Dave have visited Big Feastival this year and recetnly, they were presenting an award to Nile Rodgers together, (see the artcicle below). Also, it is good to mention 2003, when Dave backed Blair´s decision to go to war in Iraq, whilst Damon was marching against the war at a rally in London. If I remember corectly, Dave have said something about Blur being "democratical band", with each member entitled to have his view on issues like that. I can´t see why this time it would be different, it´s not war, its just the election, however important for people in Britain! 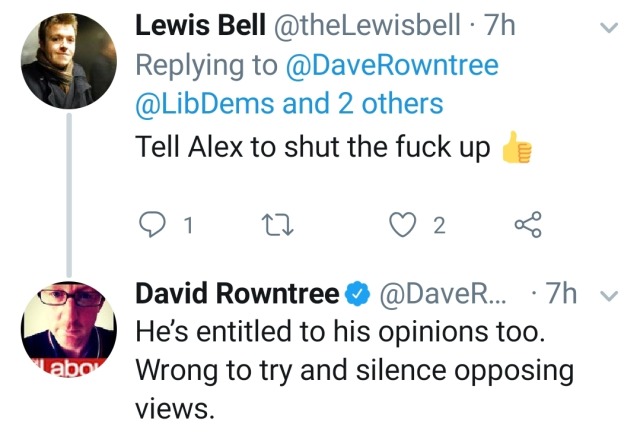 The mogwai "Blur : are shite" t shirt is priceless.
Evan Graham liked a couple of tweets.
“I need something to remind me that there’s something else”
Top

Great from Dave, of course you are allowed an opinion, the rabid left on Twitter are something else...

It's going to be a landslide for Boris and co, many Blur fans will be voting for them just because they don't go on Twitter acting like trolls, they are still there.

Can’t see what the big fuss is about, I have nothing against Labour as a party but can’t vote for them while that idiot is in charge, no idea who I will vote for.

Alex is entitled to vote for who he wants, I wish we weren’t going through Brexit, but one party or another have to get us through it, if we reverse it now surely every time a decision is made by voting it could potentially be reversed.

Trying to win votes by offering free University courses or saying NHS workers will get pay rises (I work for the NHS) seems a little cheap when we are in such a state over the whole Brexit thing.

I am sure all members of Blur respect each other’s beliefs.
Top

Other than playing in a pop/rock band, Alex has the background, interests and characteristics of someone who would harbor center-right political views. He doesn't really strike me as someone who's much of a creative out-with the context of being the bass player in Blur. He's a careerist media personality and a cheese farmer. All of this takes nothing away from the fact his bass lines are absolutely fucking lush.

He didn't even pledge allegiance to the Conservative party - he just stated he can't back Jeremy Corbyn. Maybe he'll vote Lib Dem, maybe he'll vote green!? Who cares. The only thing slightly surprising about this is the fact Alex felt the need to make his view on it public knowing full well there would be a backlash. Must have been bored and fancied a bit of drama..

He's always been a twat, but at least to us Blur fans he is a loveable twat.
Top

My tuppence on it is that he was a bit naive if he expected any other kind of response after putting that on twitter - can't see how it impacts on the likelihood of Blur doing anything, would imagine the rest of the guys have long been aware of his political leanings and differences of opinion and discussing them is the way to grow and understand other perspectives - although shouting louder seems to be a more popular response.

FWIW (and it's bugger all really) but I would have voted Labour in 2017, but was living overseas. I can't vote for Corbyn in 2019 and will be using it for another party on the left.
Top

Alex is hardly saying anything new is he

Blur the band always managed to rub along together despite different political perspectives. I can't see this impacting on the prospect of further blur action...

I'll be voting Labour as usual, despite Corbyn. He won't be around for ever.
And as for BJ - he's chameleon, comedian, Corinthian and caricature, shooting up pie in the sky...
my gig videos https://vimeo.com/user19376405
Top

Blur the band always managed to rub along together despite different political perspectives. I can't see this impacting on the prospect of further blur action...

I'll be voting Labour as usual, despite Corbyn. He won't be around for ever.
And as for BJ - he's chameleon, comedian, Corinthian and caricature, shooting up pie in the sky...

Ok so Labour spout on abot nhs waiting lists, oversized classrooms etc, the population of this country goes up a million every couple of years...so none of this will be sustainable in 10 to 20 years how ever much money they throw at it...so what is Labour's policy on immigration...

THERE ISN'T ONE...just keep on rolling and concrete over the whole country. Climate change isn't the biggest threat to the world, there's just too many people everywhere...and Labour have no plan whatsoever.

Well, I´m not British, but let me say that some reactions under Alex tweet are just beyond ridiculous. For example: "So you agree with 4 milions children in poverty!?" Wtf? It is maybe worth to mention that Labour Party was in power from 1997 to 2010 (By the way, it is longer than M. Thatcher was in office...). So it must be clear to anyone that Labour Party is also responsible for many ongoing issues in your society. As a Czech, I regret Brexit, because we see Britain as a traditional ally (it goes back at least to time of WW2, when czech pilots were serving in RAF in the fight against Hitler, who have occupied our country at the time.) But then again, its your own business. Just stop bullying Alex for voicing his opinion

It's the state of the UK generally at the moment, I'm afraid. All room for discourse, discussion & debate has gone, with people on every side choosing to slinging mud instead. I can't remember a time when UK politics was in a worse state - politicians seem to be completely unaccountable for their words & actions - and the population continue to be divided by the actions of the politicians whilst the politicians themselves just continue to get away with it.

No matter what happens over the next year or so it's going to take a long time for the UK to recover.
Top

I think it's always dangerous to show your political colours as it divides your fan base, but I think most of the comments are in good humor, I know mine was. Alot of people will respect each other views it's just the select few that don't
Top

Some are in good humor, not sure if "the most" of them. All those "accusing" photos of Alex in company of Mr. Cameron, as if he was meeting devil himself

But don´t worry, its pretty much the same everywhere, we also have our heated political debates in our country. The only trouble is that Britain is seen as country of good manners and certain restraint. But maybe this views on Britain are just stereotypes (and there must be more to life