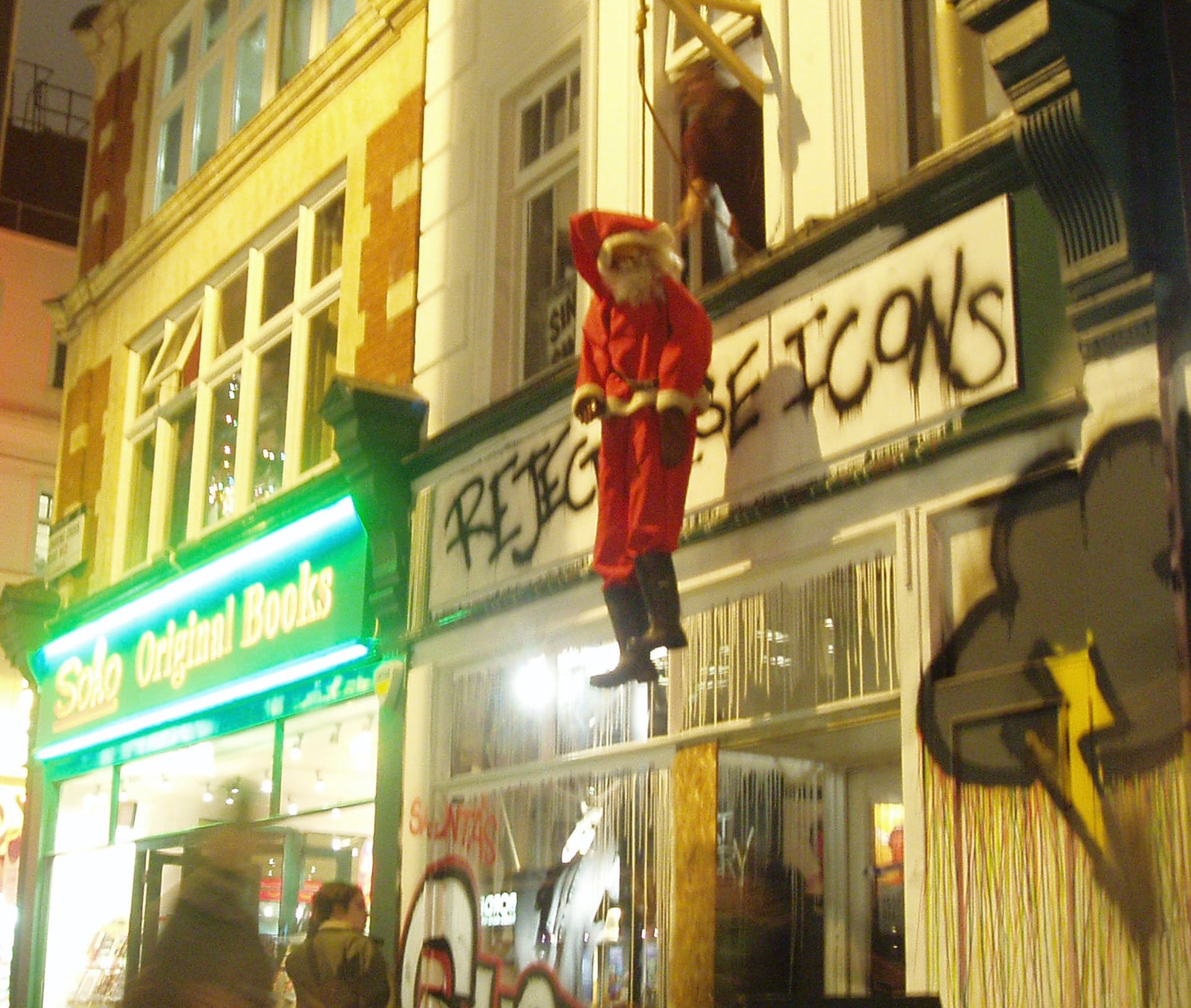 Banksy's Santa's Ghetto xmas shop - Charing Cross Road, 2004
I put me trousers on, have a cup of tea, and think about leaving the house...
my gig videos https://vimeo.com/user19376405
Top

I enjoyed it, but as per many of the reviews it doesn't really say or do anything much as a film in it's own rights. My enjoyment came more from reminiscing about going to a handful of their gigs and feeling the genuine love from the audience.

Would really struggle to recommend it to anyone who isn't a big Gorillaz fan tbh. My cinema had only sold about 40 tickets for the 6pm showing (they had a later one too).

As Caitlin said, many on here will love it mind, but if you miss out on the big screen experience I wouldn't worry it will get some sort of major release and it's far from essential.
Top

Just back from seeing it. Both my wife and I agreed that it could have been so much better and it was probably too ambitious/sprawling. As such, it didn't really have a cohesive story. It was just a linear journal of recording, touring, recording, and touring without any real insights, etc.

They had plenty of great footage, the behind the scenes stuff was cool, the shows live were awesome, but it just wasn't organized/edited to the best effect. Also, over 100 musicians were flashed on screen, but really didn't get their input on the experience of contributing to or performing with Gorillaz. Don't get me wrong, I love anything Damon does, so almost 2 hours of Damon and Gorillaz was great. But I think this was opportunity missed a little bit.

Someone on Instagram said they brought a six year old to see it. For those whom have seen it, is it really appropriate for a six year old? I can image loads of “F” bombs being thrown around. Just curious.

Is it like Bananaz? I actually enjoyed that film. I’ll get it whenever it’s released on DVD/Blu-ray. I wasn’t able to see it on Monday.
Top

According to Denholm Hewlett the directors cut will be uploaded to youtube before the end of this year.
Top

MsMagicAmerica wrote: ↑
18 Dec 2019, 19:55
Someone on Instagram said they brought a six year old to see it. For those whom have seen it, is it really appropriate for a six year old? I can image loads of “F” bombs being thrown around. Just curious.

Is it like Bananaz? I actually enjoyed that film. I’ll get it whenever it’s released on DVD/Blu-ray. I wasn’t able to see it on Monday.

It got a 15 years and over rating here. I don't remember too many swear words, but quite possible - there was a lot of smoking, which stood out to me only because of how much there was.

I wouldn't say it was like Bananaz, this was more like extended behind the scenes footage, very very little in the way of explanation of anything. Bes thing I can compare it to is the Gorillaz snapchat stories
Top

Not a parent here, but would guess it is not 6 year old appropriate.

Will be interesting to see the director's cut to compare it. I think it is different than Bananaz. Bananaz had more explanation than Icons. Icons definitely had better concert footage though, some awesome performances in that.
Top


I’m not a parent either and even though I haven’t seen the film, I can’t image it being appropriate for a 6 year old. But to each their own

I’m glad that it might be on YouTube by the end of the year because after reading everyone’s comments and reviews I’m interested in seeing it.
Top

Sorry to say that I was pretty underwhelmed when I saw it on Monday night. The attendance was good - the screen room was about 75% full, but - no audience reaction at the end. And it was a bit of a mess, jumping around all over the place. Would have been much better if, say, songs were followed through - lyrical/musical inspiration, writing, demoing, graphical interpretation, rehearsing, recording, mixing, performance and so on. We got some of this with Damon and Mavis Staples running through early work on Let Me Out, but everything else was very fractured.

I guess I was looking for more of a linear narrative (and credit to Denholm for resisting the BBC4 approach I suppose) but what we got reminded me of when you were young being allowed to sit in with the adults and join in the conversation but not really understanding what was going on. Harsh I know, but there you are. And I am an old git!

Not quite sure what the 'director's cut' is going to be about. In the context of this film (Damon/Jamie/eleven mangt) it's not as if the studio has compelled the director to go commercial against his wishes is it?
I put me trousers on, have a cup of tea, and think about leaving the house...
my gig videos https://vimeo.com/user19376405
Top

Yeah I don't get the whole "director's cut" thing either. It will probably have an extra scene that wasn't shown in the theaters, maybe cut for timing reasons? Who knows, maybe it's just a way to get people who went to see it in the theaters watch it again on YouTube.
Top

Same mess, just longer? It's more than two and a half hours long.
Top

haha i won't be watching again. i want a well done documentary led by interesting footage, interviews and 50% art/animation/film making and 50% music and collaboration

although i've been relatively negative about this 'film' i must say the recording of Damon singing Cloud of Unknowing was incredible
Mr ( ͡° ͜- ͡°) K
https://www.facebook.com/Blur2Australia
My animated I Broadcast submission https://www.youtube.com/watch?v=nHRqhEDr70M

Whole film drops on youtube at 5pm today, Xmas Eve.
Nice xmas present, like when we got The Fall 9 years ago.
Top

Watched part 1 & 2 last night, I like the content of the documentary, great to see Damon getting the best out of the artists he has worked with and it looks a great laugh to be working and touring with him. Will give part 3 a whirl tonight, looking forward to the focus on The Now Now

... Sounds as though it serves as a cool insight for fans of Gorillaz/Damon, but isn't exactly a captivating music documentary beyond that. I'm looking forward to seeing it!
Top
Post Reply
49 posts