I know tribute bands are a bit marmite, you either love or
hate them, but I went along to a Britpop Tribute night last
month in Yeovil, and saw the above Blurd, along with "Oas-is" and
"Stereo-ironics.
Musicianship very good in all 3 bands, with my main interest
on the night "Blurd", pretty spot on..
Their set on the night was, as I remember..

Pleasantly surprised, off to see them again in Bridgewater
next March.
Top

Tribute acts like that are a good source of memories from the past, at a reasonable price

im goingto see one in december that have been created especially for this event <3
Mr ( ͡° ͜- ͡°) K
https://www.facebook.com/Blur2Australia
My animated I Broadcast submission https://www.youtube.com/watch?v=nHRqhEDr70M

I watched a few videos of Blurd... They're ok, but lack the preciseness of the guitar and bass parts. Maybe I'm slightly picky, but even Song 2 isn't nailed right... This Db chord under "why I need you" should not be a barre, it's so much better the way Graham plays it including the low string, that's how he gets the earthquake sound...
Top

Yeah with Blurd I was pretty disappointed with how even basic parts in songs were wrong. The drummer was playing Country House on the ride cymbal and twice as fast, succeeding in making it sound like a dodgy Happy Mondays B side.

Saw a video of them attempting Stereotypes as well. The groove was just not there and it was like the bass and guitar player's hands just wouldn't move quick enough to execute all the right notes in the right timing.

Wouldn't normally be as critical of a band's lack of technical proficiency as music is purely expression, but when you're billing yourself as a tribute act to a legendary band and your purpose is to replicate to a certain degree of accuracy that bands back catalogue then you really need to make sure and do it justice. They fell remarkably short... Still though, if people can get pissed up and enjoy em enough to keep paying money to see them then fair enough.
Top

Other Blur tributes are available...

And looks like 2 more coming soon too..
"A Bit of a Blur" https://www.youtube.com/watch?v=IW6oN0zJ9Sw and
http://www.bluresque.com

Haven’t been able to find that video of Stereotypes - is there a link please? I ask as I’ve seen them a few times and can’t find myself agreeing with the comment above about being ‘not technically proficient’. Whenever I’ve seen them live they’ve been really good. I saw Blurry too and they’re also pretty good.

The thing that does get to me about ‘tribute’ bands is when no effort is put into the look of the band - I think we all know of plenty of tribute to a certain Manchester band who only have a pseudo-Liam and that’s it. I can say that Blurd have 3/4 of that spot on in the Damon, Graham and Alex,, looks-wise, and a couple of the other have either a Damon or a Graham that’s passable.

My other thought on this is that with comments like ‘he uses the ride and it was fast (although that video is clearly years old and, watching Blur live, it’s not far away from that at all in terms of speed) as Blur fans we don’t help the cause when actually we should be embracing the fact that we can still go and see bands playing this music - of course they’re not the real thing. They know that and we know that. But it’s better than having to suffer through some endless attempt at Mr. Bright side, Mustang Sally, or Wonderwall.
Top

Hi Earthy
Where did you see BLURry out if interest? I saw them last week with Oasis Maybe, both bands had video back drops and were excellent. Although admittedly their drummer didn't look remotely like Dave I thought their Damon was the best of all the Blur tribs I've seen
Cheers
C
Top

Hi Charlie - sorry just seen this! Saw them over the summer in Birmingham.
I certainly enjoyed it and agree their Damon's energy is really good. Drummer and bassist are not close though, but short of surgery they can't change that massively

I was very shocked to see a Blur tribute band playing in my local pub in Wantage, so I dragged some friends along to see them - they were called A Bit of a Blur and it was only their third gig, according to 'Damon'. They were very good - 'Graham' handled the guitar parts very well, think he even started rolling around the floor while playing at one point! Bass and drums were very good too, they also had a keyboardist who occasionally played acoustic guitar. 'Damon' was fine, had a good voice but didn't exactly put me in mind of the real Damon when singing.

They kicked off with 'Bang', which made me laugh a bit. They played two sets, one slightly shorter one (approx. 45 mins), 15-20 minute break, then about an hour (this is normally what bands do in this particular pub). I think they pretty much played all the singles from the 90s, with the exception of On Your Own and No Distance, along with album tracks like Advert, Badhead, This is a Low etc. There was nothing from after 13.

They all played very well, with a lot of energy and nice and fast - Coffee and TV seemed to be almost double speed! I'd recommend checking them out if they play locally to you.

One other thing, I got very confused afterwards as they were chatting to a guy who looked just like Dave Rowntree! I'm sure it couldn't have been him, it was just quite odd, especially as the actual drummer looked nothing like Dave!
Top

You are right the drummer looks nothing like Dave

Just had a quick look at the 'A bit of a Blur' facebook page and the video for TNOW and very good, love the early Blur energy they put across, although the lead vocals are a little rough, but I'd be more than happy to go along and watch a covers band like this.
Top

northernmonkey wrote: ↑
15 Jan 2019, 15:20
Just had a quick look at the 'A bit of a Blur' facebook page and the video for TNOW and very good, love the early Blur energy they put across, although the lead vocals are a little rough, but I'd be more than happy to go along and watch a covers band like this.

I think my only complaint was that the guitar was a little too distorted for TNOW, I would have liked a cleaner, bluesier tone but it's only a minor quibble.

I did yell for Colin Zeal at one point, but everyone gave me weird looks and my gf told me off for heckling!
Top

They don't seem to head towards Manchester and not something I'll go out of my way for.
Top

The blur tribute band Popscene are playing Parklife in its entirety (and select other blur tunes) at Starshaped Club's 25th anniversary celebration of Parklife. I may try to go! It sounds like a good time. 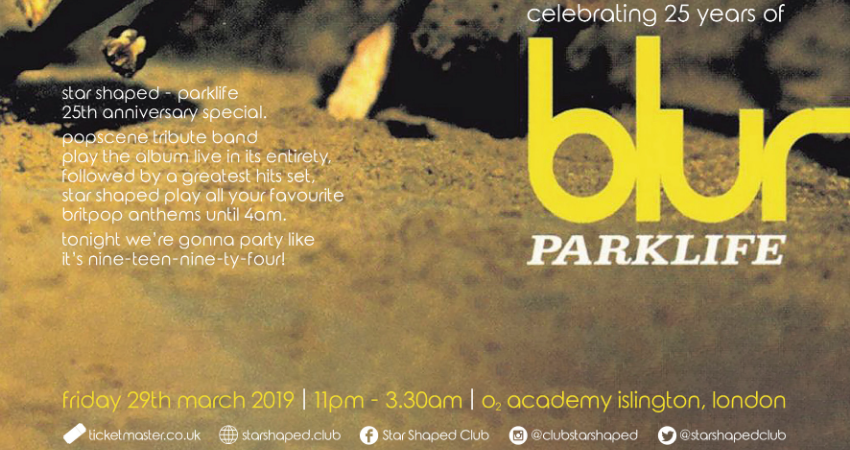