They have found beagle 2: 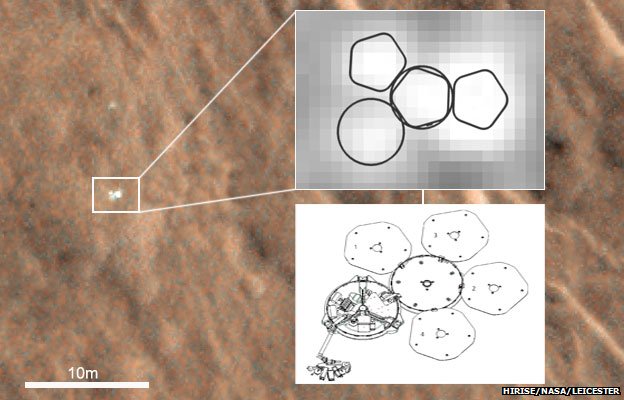 The UK’s Beagle 2 mission to Mars, which was lost twelve years ago as it entered the red planet’s atmosphere, has been rediscovered by NASA’s eagle eye in the Martian sky, the Mars Reconnaissance Orbiter. The lander appears partially deployed on the surface.

Beagle 2 was the brainchild of the late planetary scientist Colin Pillinger. Piggybacking on the European Space Agency’s Mars Express satellite, which is still orbiting Mars to this day, Beagle 2 was a stationary landing craft rather than a rover, with a remit to investigate potential signs of life, either in Mars’ past of the present day, using its robotic arm, cameras, drill, X-ray spectrometer, a gas analysis package and even a ‘mole’ that could be deployed to burrow below the surface. However, after detaching from Mars Express and coasting for six days, it entered the atmosphere at a velocity of 20,000 kilometres per second on Christmas Day 2003, after which Beagle 2 was not heard from again.

There were many theories about what happened to Beagle 2. Pillinger himself though that dust storms on Mars could have warmed the atmosphere, causing it to expand and become less dense, meaning the parachutes could not function as planned and Beagle 2 would hit the surface too hard. Other scenarios included a leak in Beagle 2’s air bags that would have cushioned its landing, its backshell tangling with its parachute when it detached, or becoming tangled up in its parachute upon landing.

Ever since, Mars scientists have been searching for some clue to explain its disappearance. The Mars Reconnaissance Orbiter’s HiRISE camera is able to see things on Mars’ surface as small as 30 centimetres across and now, after nearly a dozen years, it has found the long lost lander.

Yes, you beat me to it. Glad to hear they found it.

I wonder why it didn't properly deploy? I expect we may never know for sure.

Better have a bit of this: https://www.youtube.com/watch?v=BZL--NqSEiw

101reykjavik wrote:Yes, you beat me to it. Glad to hear they found it.

I wonder why it didn't properly deploy? I expect we may never know for sure.

Better have a bit of this: https://www.youtube.com/watch?v=BZL--NqSEiw

The sound that was never heard.

and the BBC earlier today http://www.bbc.co.uk/news/science-environment-30784886" onclick="window.open(this.href);return false;
I put me trousers on, have a cup of tea, and think about leaving the house...
my gig videos https://vimeo.com/user19376405
Top

Woke up to this news today, great stuff and fascinating. I'm sure we'll know what happened to it in the distant future when we go to Mars and build a colony or something. But safe to say we'll all be dead when that happens.

fab stuff - and said today, too

fab stuff - and said today, too

"25 million is what NASA would spend on a screwdriver"