I also have a (perhaps blind) hope that blur will be next up… after Damon’s next Malian endeavor. The thing about that is it’s probably quite close to finished by now, relatively speaking, especially considering the pace at which damon works and his recent trip to Mali.

I think the stars may align. The boys are on their best terms in ages, maybe ever, after TMW. Damon will be done soon with TGTBTQ (no way they tour past this year) and again, I doubt the Malian musical will get too in the way of other projects (but I may be proved wrong). Graham has been more active musically than he has been in ages, and seems to be having a great time collaborating with other musicians — and who better to collaborate with than Damon, as they’re unlike any other duo when put together. Alex is probably just waiting for the call any day, other than when he’s planning the Big Feastival, and the timing may work out now that Dave will be available.

Again, this may be blind hope, but I seriously doubt we have seen the last of blur. And I would love to have Tony Visconti producing a new blur album based on how great Merrie Land is. Also, TracyJosh, I would also like another Damon solo album. But hopefully after blur!

Everytime I think maybe we won't have anymore Blur, I watch New World Towers doc and the part Damon says how great it is to have Blur as a fully functional band again (rather than just touring nostalgia I'd imagine) and the part about having plenty more adventures left in Blur. I also agree about the producer, amazing job on Merrie Land.
Top

Here's a pretty cool look back at Blur's 1995 show in Grimsby.
Top

Blur are ten songs into their much hyped Hyde Park 2019 reunion concert. Its basically the same as 2009 and 2012, and only one Magic Whip song has survived (Ong Ong), and it seems to be very hits-oriented, but everyone's having a good time.

"I want to introduce you to a friend," Damon announces to the sold out crowd, who cheer loudly, perhaps anticipating Noel Gallagher, Snoop Dogg or Paul McCartney

"Oi!", shouts a cockney accent from the side of the stage. But the crowd knew it was Phil Daniels before they even saw him walk to the stage front.

Half the crowd, the long time fans, are rolling their eyes thinking "stop wheeling Phil out do 'Parklife' for crying out loud! You do this everytime! We've heard it everytime!". The other half of the crowd, the more passive among them, are cheering "Yay they're gonna do Parklife! my favourite!"

But the passive fans turned to quick bemusement when, instead of leading them in with his riff, Graham disappears from the stage and is replaced with a steadily ticking electronic beat.

The huge Blur fans in the audience are stunned that this is being performed. What the hell!? The other half of the audience are totally annoyed by what to them seemed like a meandering nothing, with a drunk Phil atonally intoning some random nonsense about nothing over these beats.

It turned out to be a 15 minute extended version. It had all the loud bits from the original - CAN WE STOP NOW! PLEASE!, YOU'RE BORINGGGGG! - except Phil took it in his stride to amplify the menace by going down to the front of the audience, shouting "YOU'RE BORING!" and "CAN WE STOP NOW!" into the individual ears of about 30 people, who it seems were deafened by the experience.

After this avant-garde HORROR, Damon announces to the exhausted, disgruntled audience that "we're gonna do another with Phil actually. Stay for one more, won't you Phil?" Phil of course replies, "my pleasyah"

Half the crowd, the long time fans, are rolling their eyes thinking "stop wheeling Phil out do 'Parklife' for crying out loud! You do this everytime! We've heard it everytime!". The other half of the crowd, the more passive among them, are cheering "Yay they're finally gonna do Parklife! my favourite!"

Damon likes to keep everyone guessing....

My favourite music reviewer Marcello Carlin has reached Parklife on his blog where he and his wife Lena Friesen review every UK No. 1 album

The TGE one will be epic size apparently

AdvertBreak wrote: ↑
12 Mar 2021, 14:02
My favourite music reviewer Marcello Carlin has reached Parklife on his blog where he and his wife Lena Friesen review every UK No. 1 album
http://nobilliards.blogspot.com/2021/03 ... klife.html
The TGE one will be epic size apparently

Thanks so much for this - a great read, and a great find.
And then of course I followed them elsewhere in the blog - the Beatles stuff is particularly good...
I put me trousers on, have a cup of tea, and think about leaving the house...
my gig videos https://vimeo.com/user19376405
Top

Blur have finally cleaned up their Youtube accounts. Moved the Blur videos that were on the Parlophone page to the Blur page and deleted all the duplicate videos. Not huge news, but a sign that they are taking Blur's catalogue more seriously on streaming sites.

His vocals kick in on the last 20 seconds of this teaser.
Top

That's interesting, someone did all this work on Blur yt channel last month, neat playlists and so on.

I wonder if Damon's (Gorillaz?) featuring on Flume song is the thing did three years ago. He mentioned this collab in Beats1 interview.
Top 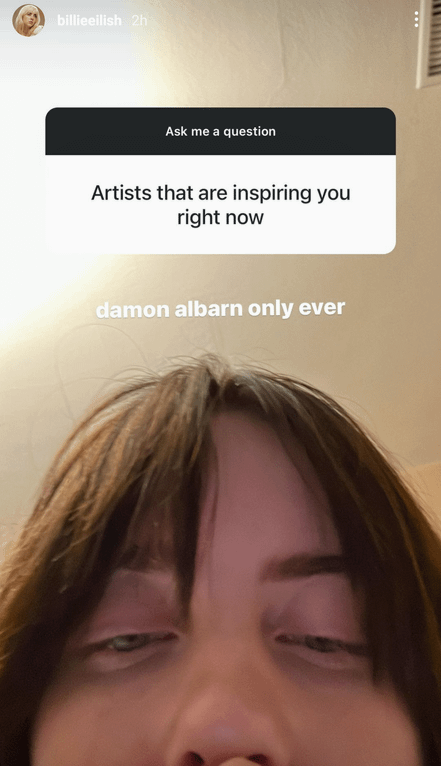 I was today old when I discovered the Kinks song 'House In The Country' - even though I count myself a Kinks fan and know Damon was influenced hugely by them, I've never heard the Face to Face album

I was also 15 in 1995, bought Country house, was there at the height of the Blur/Oasis thing, lifelong Blur fan... but yeah, I was today old before realising the connection - you can always learn new things!